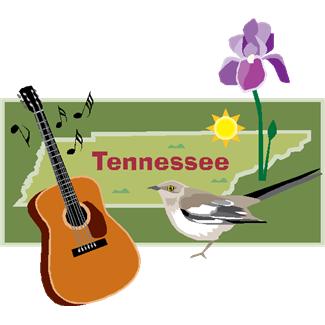 Here are some fun Tennessee facts:
The capital is Nashville.
The largest city Memphis.
State motto is “Agriculture and Commerce”
State nickname is The Volunteer State.
State flower is the Iris.
State bird is the Mockingbird.
State animal is the Raccoon.

Mystery authors who are found on the Cozy Mystery Site who feature Tennessee locations in their books:

Deborah Adams: Jesus Creek Mystery Series: Jesus Creek, a small town in Tennessee, is the setting for this very unique series. Each book features a different character as the sleuth.

V.M. Burns: Lilly Echosby Dog Club Mystery Series – Lilly is a recently divorced CPA who is a member of a dog club in Tennessee.

J. J. Cook (aka Joyce and Jim Lavene): Sweet Pepper Fire Brigade Mystery Series: Stella Griffin is the sleuth and current fire chief. Stella gets a lot of help from the ex-fire chief, Eric Gamlyn, who happens to be deceased!

Christy Tillery French: Natasha Chamberlain Mystery Series: Natasha is a bodyguard who works for Jonce Striker (the owner of the bodyguard company) in Knoxville, Tennessee.

Susan Furlong: Bone Gap Travellers Mystery Series – Brynn is an ex-Marine who returns to Tennessee with her cadaver dog, Wilco.

Joyce and Jim Lavene (aka J.J. Cook & Ellie Grant): Taxi for the Dead Paranormal Mystery Series: Police officer Skye Mertz makes a deal with Abe to drive Abe’s Taxi for the Dead so that she can be saved from dying.

Molly MacRae:  Haunted Yarn Shop Mystery Series: Kath Rutledge is the owner of a wool shop that has, as its tenant, a ghost.

Mystery and the Minister’s Wife Mystery Series: This series follows Kate and Paul Hanlon (a minister and his wife) in Copper Mill, Tennessee. Several authors pen this mystery series.

Delia Rosen: Deadly Deli Mystery Series: Gwen Silver (aka Nashville Katz) is the owner of a Nashville Jewish deli, and also a sleuth.

Mary Saums: Willi Taft Mystery Series: Willi is not only a private investigator, but a Nashville singing sleuth as well.