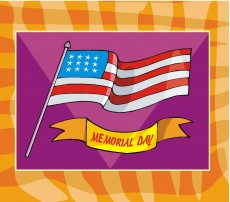 Have a good Memorial Day! I hope all of you are taking it easy and enjoying the three-day weekend >>> perhaps remembering people you know (and have known) who devoted their lives so that we can live in this great country. Also, pausing a moment to think of all Americans who ensured (and still ensure!) that we could live in this wonderful country where we sometimes take our freedom for granted.

Thank you to ALL Veterans!