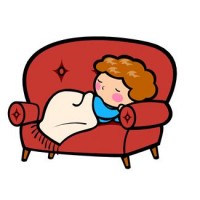 I think I mentioned that my daughter sent a lot of her belongings home last summer by UPS. Unfortunately the truck her things were in was involved in an accident, and she lost three of her large boxes. (Fortunately, no one was hurt in the accident!) So here comes another “unfortunately”>>> She lost three of her work suits, and many other items, including an afghan I had crocheted for her when she was little. She was quite attached to the afghan, not because I am a great crocheter, but for sentimental reasons.

The yarn company no longer makes that multi-colored yarn, so we spent several days at the beginning of the summer trying to find a yarn that would closely resemble the previous afghan’s yarn. We came up with two different colors, one of which matches her current bedspread at her home, and the other which matches her bedspread at our house.

I am glad to say that I finally finished her afghan. My husband and I took it up to her this past weekend. I hope this afghan becomes as cherished to her as her lost/destroyed one. For some reason, it took me longer to crochet this one than it did the last one. Of course, it could just be my memory playing tricks on me. Perhaps I just think I whipped the last one out in record breaking speed because time seemed to go so much faster – back when I had little ones at home.