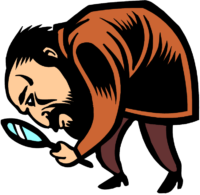 Well, as I said last month, I had let quite a few of these accumulate over time… I’m trying to keep the number a bit lower, so I might try to do this more often, possibly as often as once a month if I have enough questions.

I recently listened to an audiobook cozy mystery about a witch who worked as a wedding/events planner, but I can’t remember the name of the series or the author!

EDIT: Well, Lelia already found this one – it was the A Touch of Magic Series by Danielle Garrett.

I am looking for a mystery series set in Seattle. I read these in the late 1980’s and really enjoyed them. Protagonist is a former Seattle policeman who is on medical retirement. He rides a bicycle for fitness and local competitions. He rents a basement apartment in his house to a female law student. Anyone know the author?

EDIT: A number of readers (Elizabeth, Debbie, Laura, SL, Sharon, J, Kate, and Becky) have all suggested that this could be Earl Emerson‘s Thomas Black Series.

While everyone is looking, remembering, and suggesting authors, maybe someone can come up with a series I’ve been trying to find. About a woman in Northern California, I think, who works for a phone company(?) and who left a prior job to move to this small community.

EDIT: Debbie suggested that this might be the Vejay Haskell Mystery Series by Susan Dunlap.

I read this mystery book maybe 10 years ago and loved it but have no idea who wrote it. It’s about an old lady in who owns an inn or hotel and she is a bit eccentric. She lives here with her son. The main character goes to visit this place and finds a diary from a maid who used to work there who disappeared somehow but had had a baby prior. In the end, the old, eccentric lady ends up being a man and her son ends up being the missing maids son.

There’s a book series that I’ve been trying to figure out too. I don’t remember very much about it but it had an older man in it and I wanna say his nephew or younger friend? There was a murder in it (I think in mississippi or in the bayou?) and the old man is like brilliant or extremely smart. It was an old book That I found at my nanas house and I think it was my dads book. I think the main character has 2 initials as his first name. I think it was a series and could be from the 40s or 50s