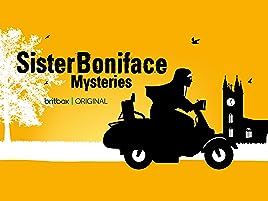 The Sister Boniface Mysteries is a British series that is available on BritBox. Sister Boniface is a perky, upbeat, ex-spy, Ph.D. – who does all of the forensics involved in solving a crime. She is the crime scene investigator, the lab technician, and she pretty much takes care of all the technical positions involved. Lorna Watson portrays Sister Boniface in an almost staccato mode. She walks, talks, and moves in a very controlled and planned manner. Sister Boniface is clearly a genius – definitely the smartest person in any room she’s in.

There are four other characters featured in this series, and all of them are very well-portrayed: Max Brown (the inspector), Jerry Iwu (the new detective who thought he was going to work at Scotland Yard, who finds himself in this cozy village), Miranda Raison (the journalist who always seems to be eavesdropping as crimes are being discussed), and Ami Metcalf (the constable).

The name of the village is a telling hint that this is a mystery series: “Great Slaughter”. The Sister Boniface Mysteries series is set in the early 1960s – the same as the Father Brown series. Sister Boniface zips around on her moped scooter and isn’t averse to breaking a few rules. The village setting is exactly what you would expect – beautiful, serene, full of friendly people, tranquil >>> until, of course, the pesky crime occurs!

My husband and I watch Sister Boniface at the end of the day – when we’re sort of unwinding. We know we’ll enjoy it and we know there won’t be any graphic “adult situations” that will jolt like scenes that depict a forensic pathologist pointing out how a mangled body looks on the morgue’s “slab” – while the pathologist is eating a sandwich. You won’t see that here!

This is another British “feel good” mystery television series that seems to be an oxymoron. You may ask: How in the world can a show that deals with death be a “feel good” TV show? Well, if you watch this show you’ll find out how!